Richard Wagner's sole mature comic opera premièred in 1868 and has remained one of the Bayreuth master's most popular works ever since. The work was first conducted at the Wagner in Budapest Opera Festival in 2013 by artistic director Adam Fischer.
The young British opera singer James Rutherford burst into the public consciousness as the winner of the Wagner singing competition in Seattle, and since then has played a number of Wagnerian roles worldwide, including Hans Sachs twice at the Bayreuth Festival. Despite being still in his early 40s, Gábor Bretz has already taken the stage at a number of the world's leading opera houses (Milan's La Scala, London's Covent Garden, New York's Metropolitan Opera, and the Wiener and Hamburgische Staatsopers), working with such conductors as Esa-Pekka Salonen and Philippe Jordan.
The German soprano Annette Dasch distinguished herself in a number of Mozart's works before appearing in Bayreuth as Elsa in Lohengrin, first in 2010, and then on five more occasions to follow. Danish baritone Bo Skovhus has had a highly unusual career, having studied as both a doctor and a singer - a choice eventually made easier for him after his rapturous reception in the role of Don Giovanni. One of the most prominent German tenors, Daniel Kirch has worked with such renowned conductors as Zubin Mehta, Marek Janowski, Valery Gergiev, René Jacobs, Christian Thielemann and Claudio Abbado. The Austrian tenor Norbert Ernst made his Bayreuth début in a production directed by Pierre Boulez, and has appeared there in ten years so far, portraying Hans Sachs's apprentice, David, through four summers.

More information about the Wagner in Budapest Opera Festival here. 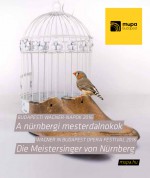