Fabio Biondi and his world-renowned ensemble premièred this theatrical work - one of the most significant of the decades of the 18th century prior to Mozart - with the same splendid performers at the Salzburg Easter Festival in 2010. It is the penultimate opera by the German composer Johann Adolf Hasse, a craftsman of unmatched quality of the so-called Neapolitan style who instructed the young Maria Theresa and also won the admiration of King Frederick II of Prussia. Few would argue that this variation of the Romeo and Juliet story, disguised in mythological garb and staged with, in the spirit of reform opera, no more than three characters, offers the chance to participate in something sensational. When it comes to familiarity with the style galant that flourished on the cusp of the Baroque and the Classical, one could not find a better ensemble than Europa Galante, which, led by conductor and violinist Fabio Biondi, famed for his brilliantly original and mature interpretations, has already made a number of discoveries, in each case impressing the audience with world-class productions.
Of course, the vocal soloists have also played a part in this. On this evening, Alaskan-born world star Vivica Genaux sings the role of the love-smitten youth Piramo. Performing the role of Tisbe is Desirée Rancatore, a frequent guest artist at the world's leading opera houses, and one who has accumulated triumph after triumph with her portrayals of characters from Salieri, Mozart, Pergolesi, Donizetti and Verdi. The Italian tenor depicting the father, Emanuele D'Aguanno, is also a beloved and sought-after performer on the opera stages of Europe. 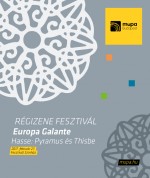